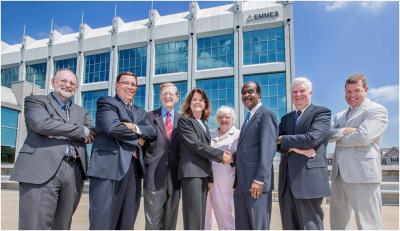 The EMMES Corporation today announced that it has signed a 10-year lease that gives the company expanded office space at its current headquarters at 401 North Washington Street in Rockville’s town center. The lease totals 97,000 square feet.
“Our new lease signals the next chapter of success for the company,” said Dr. Anne Lindblad, executive vice president of EMMES. “We have built a reputation as a trusted partner to researchers who are dedicated to developing better treatments for patients. We’re proud of our 35-year history, and we’re optimistic about our future opportunities.”
Brian Hochheimer, EMMES vice president and chief financial officer, added, “The new lease supports our growth and hiring plans. It gives us four full floors and represents nearly a three-fold expansion compared to the square footage of our original lease. We love being right in the center of Rockville, and we’re pleased to continue the relationship with our landlord, 401 North Washington LLC.”
According to Isiah Leggett, Montgomery County executive, “We’re thrilled that EMMES has decided to remain in Rockville, the third largest city in Maryland and a robust business center. EMMES has been a pillar of our local economy, creating and sustaining jobs that contribute to the improvement of public health. The company offers scientific, technology and research services and has a highly educated employee base.”
Phyllis Marcuccio, Rockville mayor, noted, "We are delighted that EMMES, one of our major employers, has elected not only to remain in our city, but to enlarge and upgrade its space. The City of Rockville
looks forward to working with and supporting the company as it continues to contribute to the life sciences industry cluster here."
Leggett added, “With the signing of the new lease, EMMES remains close to the campus of one of its major customers, the National Institutes of Health. Company executives cited the outstanding location in Rockville Town Center, proximity to public transportation and the excellent educational offerings at the Universities at Shady Grove as key reasons for maintaining its headquarters in our county.”
EMMES was represented by Larry Bank and Lisa Benjamin of Newmark Grubb Knight Frank in the transaction.