Emmes is excited to share the significant progress being made in clinical studies we undertake for clients and to give you a look inside some of our own news.

03/23/2020
Kathleen Wolf Joins Emmes as VP of Clinical Operations
Emmes today announced that Kathleen Wolf has joined the company as vice president of clinical operations. She has two decades of leadership experience in the biopharmaceutical industry, including most recently as a senior director with AstraZeneca’s MedImmune unit. Dr. Anne Lindblad, president and chief executive officer of Emmes, said, “Kathleen is an outstanding addition to our leadership team. Her background in both biotech and pharmaceutical settings will be a great asset. Her experience in building collaborative, cross-functional teams complements our clinical operations platform.”
Download Read More
01/21/2020
Emmes Study Leads to Pediatric Drug Labeling Change for Ampicillin
Emmes today announced that the Food and Drug Administration (FDA) has extended the labeling of ampicillin, a commonly used antibiotic, to include use in infants younger than 28 days in the treatment of serious conditions meningitis and septicemia. FDA’s approval was based in part on a National Institute of Child Health and Human Development (NICHD)-funded study, conducted under the Best Pharmaceuticals for Children Act (BPCA).
Download Read More
01/06/2020
Emmes Studies Contribute to FDA Approval of a Medical Device That Estimates the Weight of Infants
Emmes today announced that the U.S. Food and Drug Administration (FDA) has approved a prescription-only medical device used to estimate the weight of infants who are up to 90 days of age.
Download Read More
12/02/2019
Emmes Will Support Development of a New Universal Flu Vaccine for The National Institute of Allergy and Infectious Diseases
Emmes today announced that it is part of a team of medical centers, universities and private industry supporting the development of a “universal influenza vaccine” that could provide longer-lasting protection than current vaccines and combat a wider variety of influenza viruses.
Download Read More
11/25/2019
Emmes Names Lynn Lewis Chief Business Officer
Emmes today announced that Lynn Lewis has joined the company as chief business officer, a newly created position. Her overall focus is to build deeper relationships with existing clients and to develop new business opportunities, particularly among biotech and pharmaceutical companies.
Download Read More
10/10/2019
Emmes Awarded New NIH Contracts that Address the Nation’s Opioid Addiction Crisis
Emmes today announced the award of eight new task order contract awards associated with the Helping to End Addiction Long-term℠ Initiative, known as the NIH HEAL Initiative℠. The total value for the eight contracts is more than $9 million. The contract awards’ duration ranges from one to five years.
Download Read More
09/30/2019
Emmes Ranked as a Top Private Company
Emmes today announced that it was ranked as one of the 100 largest private companies in the Washington metropolitan area. The ranking is compiled annually by the Washington Business Journal. The company was ranked as the 83rd largest private company this year. Its most recently reported revenues were more than $114 million, and about 600 of the company’s 725 employees work in the Washington area.
Download Read More
07/24/2019
Emmes Honored for Workplace Excellence
Emmes today announced that it has received a Workplace Excellence Seal of Approval from Alliance for Workplace Excellence (AWE). This is the fifth consecutive year the company has received the AWE Workplace Excellence award.
Download Read More
04/02/2019
Emmes-Supported Study Results in the First Pediatric Drug Labeling Change for 2019
Emmes today announced that it provided the data management support for a study, funded by the National Institutes of Health (NIH) and approved by the Food and Drug Administration (FDA), to safely use Acyclovir to treat infants infected with the Herpes Simplex Virus. Acyclovir, known by the brand name Zovirax, now includes recommended usage and dosage for newborns and infants up to three months of age on its label.
Download Read More 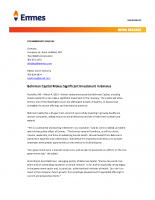 03/04/2019
Behrman Capital Makes Significant Investment in Emmes
Emmes today announced that Behrman Capital, a leading private equity firm, has made a significant investment in the company. The capital will allow Emmes, one of the Washington area’s top 100 largest private companies, to expand and strengthen its service offerings and international presence.
Download Read More 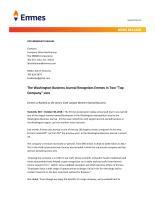 June is a month to celebrate outdoor recreation with #GreatOutdoorsMonth! Here some members of the Emmes social media team (and their grandkids) enjoying some time spent in our great outdoors. pic.twitter.com/iImDu3EKcF