Emmes is excited to share the significant progress being made in clinical studies we undertake for clients and to give you a look inside some of our own news.

04/23/2018
Emmes Launches New Internship Program with an Egyptian Children's Cancer Hospital
The Emmes Corporation today announced the creation of an internship program in which the company will offer one fellow from Egypt’s Children Cancer Hospital an internship to gain training and experience in clinical research. Under the new program, one fellow will be selected each year to travel to Emmes’ headquarters in Rockville, Maryland, to work with its clinical research experts. The duration of each internship will be determined on a case-by-case basis.
Download Read More
03/28/2018
Emmes and IDx Partner Using Artificial Intelligence to Detect Diabetic Retinopathy in Primary Care
The Emmes Corporation today announced the completion of a pivotal clinical trial for a new product developed by IDx that could help in detecting diabetic retinopathy, the leading cause of blindness in the United States. IDx-DR is a fully autonomous AI-based diagnostic system that analyzes images of the retina for signs of diabetic retinopathy, providing instructions for follow-up care based on the level of disease detected. IDx-DR has been granted expedited review by the Food and Drug Administration.
Download Read More
12/20/2017
Seven Emmes Employees Recognized in Lancet Study Comparing Two Opioid Treatments
The Emmes Corporation today announced its participation in a three-year study testing the results of two different opioid treatment medications. The research, published in one of the world’s oldest and best known medical journals, concluded that for those able to begin treatment, both drugs are nearly equal in their safety and effectiveness. The National Institute on Drug Abuse (NIDA) funded the research. In addition to providing data management and statistical support, Emmes served as the clinical coordinating center. This involved protocol development, pharmacovigilance, quality assurance, safety monitoring and regulatory support. The clinical trial occurred between 2014 to 2017 at eight community treatment programs across the U.S. A total of 570 patients participated, with each group followed for a 24-week period.
Download Read More
12/07/2017
New Research Links Umbilical Cord Blood to Motor Function Improvement in Children with Cerebral Palsy
The Emmes Corporation today announced its statistical and data management support of a clinical trial that offers new hope for children with cerebral palsy (CP). Stephen Wease and Dr. Beth Blackwell joined a team of prominent researchers from Duke University Medical Center to test whether umbilical cord blood would improve motor skills function in children suffering from the disorder. According to Wease, Emmes project leader, “The phase II trial showed promising results, and we’re eager for the next phases of research to further our understanding of this encouraging new mechanism for treating children with CP.”
Download Read More 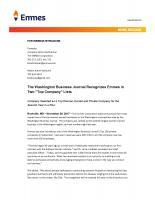 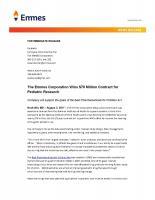 08/02/2017
The Emmes Corporation Wins $70 Million Contract for Pediatric Research
The Emmes Corporation today announced that it was awarded a contract from the National Institutes of Health to support pediatric clinical trials sponsored by the National Institute of Child Health and Human Development (NICHD). Valued at nearly $70 million, the 10-1/2 year contract will support the NIH’s effort to improve the labeling of drugs for pediatric use. The company’s role as the data coordinating center involves study design, data management, regulatory support, pharmacovigilance, site monitoring, and statistical analyses.
Download Read More
05/17/2017
Emmes Recognized in Eye Disease Research Published by the Journal of the American Medical Association
The Emmes Corporation today announced that Dr. Paul VanVeldhuisen, chief operating officer and principal investigator, co-authored a study published by the Journal of the American Medical Association (JAMA). The study focused on the efficacy and safety of a commonly used, off-label drug called Avastin in treating macular edema due to central retinal vein occlusion. The study also addressed how Avastin compared to another drug, Eylea, which has been approved by the FDA and is being used to treat the same disease. The 2-1/2-year study with nearly 400 patients concluded that Avastin was as effective as Eylea in improving vision after six months of treatment. The cost of Avastin is $60 per dose compared to Eylea’s $1,850 per dose.
Download Read More
05/03/2017
Emmes Expands Zika Research
The Emmes Corporation today announced a contract spanning just over four years for a Phase 2 study of a Zika vaccine. The contract, valued at up to $27.6 million, expands the initial Phase 1 testing that began last year. This is the first-ever Phase 2 study for a Zika vaccine. Dr. Anne Lindblad, president and chief executive officer of Emmes, said, “The win is important because it expands our role in combating the Zika virus, a significant and enduring public health challenge.”
Download Read More 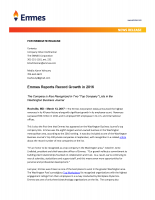 03/13/2017
Emmes Reports Record Growth in 2016
The Emmes Corporation today announced the highest revenues in its 40‐year history along with significant growth in its employee count. Revenues surpassed $90 million in 2016, and it employed 567 employees in its U.S. and international offices.
Download Read More

11/14/2016
Research on traumatic brain injury in the military highlighted in Undersea and Hyperbaric Medicine Journal
The Emmes Corporation today announced that a large team of scientists and health professionals including those from the company, LDS Hospital in Salt Lake City, Utah, Lovelace Biomedical Environmental Research Institute in Albuquerque, New Mexico, and the U.S. Army Medical and Materiel Development Activity at Fort Detrick, Maryland, have authored a series of papers summarizing significant research on traumatic brain injury in the military.
Download Read More
03/10/2016
Data Analysis Conducted by Emmes Contributed to New NIH Research Linking Air Pollution to Preterm Birth Risks in Mothers with Asthma
The Emmes Corporation today announced that it contributed to a landmark research study by the National Institutes of Health linking air pollution and preterm birth risk in pregnant women with asthma. The study, published in the Journal of Allergy and Clinical Immunology, reported that pregnant women with asthma have an increased risk for preterm birth when exposed to high levels of nitrogen oxides and carbon monoxide, common traffic-related air pollutants.
Download Read More 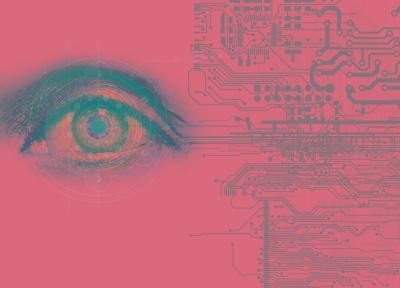 02/08/2016
Dr. Paul VanVeldhuisen Named Chief Operating Officer of The Emmes Corporation
The Emmes Corporation today announced that Dr. Paul VanVeldhuisen has been promoted to the newly created position of chief operating officer. Dr. VanVeldhuisen, who started at Emmes as a statistician and epidemiologist, will assume the additional leadership responsibilities while continuing to serve as principal investigator for government and privately funded research projects.
Download Read More

June is a month to celebrate outdoor recreation with #GreatOutdoorsMonth! Here some members of the Emmes social media team (and their grandkids) enjoying some time spent in our great outdoors. pic.twitter.com/iImDu3EKcF